In Doug Wilson’s June 15, 2017 “Content Cluster” email blast he shared a link to the video of Bob Dylan’s 2016 Nobel Lecture in Literature. Just this last year Dylan won the Nobel Prize for Literature. As you may or may not remember, the Nobel committee could not get in contact with Dylan for some time. Apparently, even he was rather befuddled why he had been awarded this honor. Most people know Bob Dylan by name, and the baby boomers reading this can probably name a number of his songs, but I was not too familiar with Dylan at the time he was awarded the prize. So I figured I’d try to figure out what all the hoopla was about. 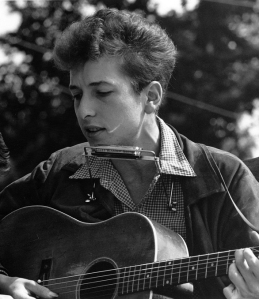 What I found was a song-writer who encapsulates the very best of modern music—the Myth that underlies old rock ‘n roll, country (before it turned into pop music), folk & blues music, and even some Christian music. I have become more convinced over the past few years that Myth is that transcendent quality that separates great modern music from merely tolerable pop(ular) music. There certainly are other elements such as tonal quality, creative melodies/harmonies, and instrumental excellence[1] that are to be considered. These latter qualities can certainly create songs that are beautiful, but with the advent of recent technologies, it is becoming harder to discern the music that is written with excellence and that which is written with the help of (or even written by) computers—at least for a “hack musician” like myself.

But unable to be generated by a machine, Myth proceeds from a Soul—a Soul steeped in the Story and Tradition of the Myth which they have chosen to inhabit. It is this Myth that takes the listener into a timeless state of stories, characters, and themes that transcend the current culture. Those that have not had their souls saturated by the Myth cannot write as natives to this country. Each tradition has its own stories with its own characters at the heart of those stories. These stories and characters carry a passed-on story with them. They are rooted in a history that goes back many generations—histories spanning from the Exodus from ancient Egypt to working as a slave in the fields of Alabama or laboring as a coal miner in the depths of the Earth. In country music, the tradition I am most familiar with, some of the characters (or places) that have developed a transcendent Mythic quality are: Momma, Daddy, the Preacher(man), my Truck, Texas, and the Highway. Other traditions have other characters. Dylan describes some in the folk tradition in the linked video. As more and more people connect to these stories, and re-tell them, the stories get broader and richer. The next generation suffers along with their cultural ancestors and learns to interpret their own experiences in that light.

So what is the failure of modern pop music? Much of modern pop music has divorced (perhaps they would say “liberated”?) itself from the Myth. There is nothing transcendent about it. It lacks the vision of a future in which listeners 30, 40, or 50 years down the road might return back to it. It is written in the moment and for the moment. While this might be expected of modern secular artists, who do in fact live for the here and now, the great tragedy is that modern Christian music has followed suit. But Christians are not rooted in the here and now, but worship the Ancient One—the One Who Was, Who Is, and Who Is To Come—Ancient, Present, and Future.

I no longer enjoy listening to any Christian Music radio station that I am familiar with and here is why: Christians have access to (and actually believe) the most majestic, deep, timeless, and ancient of all stories—the True Myth as Tolkien would help C.S. Lewis come to understand. Christian songwriters have a gold mine—a limitless treasury—of Myth to draw upon[2]. Instead of songs pouring forth from writers who have immersed themselves in the Story of Scripture, we get the same regurgitated lines, “lalalas”, and “safe” lyrics[3].

And this leads me back to Bob Dylan and classical Christian education. Dylan was saturated in his tradition. What gives him this ability? He credits his education for giving him the background to be able to write about the complex themes of life. Most of what he says in the video is about how three classic novels (Moby Dick, All Quiet on the Western Front, and the Odyssey) shaped his song writing.

While we may disagree with some of his application and interpretation, I think we can all agree that we hope our students will reflect on such works as Dylan does. All of our schools have slightly differing approaches on this but we all hope that our students will become steeped in the tradition of the Great Books. We hope that they will join the Great Conversation that was begun so long ago and will continue on into Eternity[4]. May the future Christian songwriters who come out of our schools do justice to the True Myth found in our God-Breathed Scriptures and Ancient Tradition!

If you have 27 minutes in the car or folding laundry today, give Dylan’s lecture a listen: https://youtu.be/3Zf04vnVPfM

[1] I am limiting the scope of my brief analysis to modern music that is characterized generally by repeated choruses, modern instruments, short 3-5 minute self-contained units, and typically designed for the radio. Some examples of music that I would not include in this analysis are classical-style, orchestral, chamber, House, or any kind of music that does not have discernible lyrics in the vernacular.

[2] There is much that can be discussed about why this is. I think one of the main drivers is based out of fear—modern Christian music is designed to be “safe” to listen to rather than seeking to be True, Good, and Beautiful. It’s very difficult to write about the broad scope of biblical themes and stay “safe”. As a parent, I know that much of what is found on secular radio stations is not appropriate for children. Again, there is much to be discussed here for another time.

[3] There are a number of exceptions to this but, at least where I have lived, they get very little radio time. Some notable exceptions are: Andrew Peterson, Rich Mullins, and Jon Foreman. I’m sure—at least I hope—that you can think of some others as well. I also acknowledge that not every song played on Christian radio is poor. I like some of the songs on Christian radio stations, but the ratio of poor to good is quite disproportionate.

[4] While it’s not unusual for people to reflect back on teachers that influenced them during school, what seems to set Dylan’s recounting apart is that it is the Great Works themselves that have shaped him. I believe this is our goal for our students as well—even if we ourselves are forgotten.