You can read the first two articles in this series at the following links: 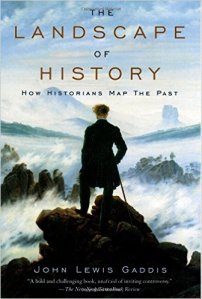 In chapter 2 of The Landscape of History, John Lewis Gaddis discusses time and space, which he identifies as “the field in which history happens (35). In chapter 3 he discusses the “mechanism” of historical study—structure and process. Gaddis focuses on the similarities and differences between historical processes and scientific ones. One area of overlap is the notion of reproducibility as the key to consensus (39).

Gaddis addresses the challenge of some that history lacks the reproducibility of science because it isn’t worked out in laboratories. Gaddis responds that not all sciences work this way, however; astronomy, geology, paleontology, and evolutionary biology, although aspects could perhaps be explored in a lab, do not follow the same processes as laboratory sciences. One reason is that these scientific disciplines, like history, require a time span that exceeds the life of the observer. Consequently, such disciplines require thought experiments that extrapolate from known data and then present conclusions “suggesting which of these mental exercises comes closest to explaining their physical observations” (40).

After discussing examples of such approaches—from Darwin to Wegener to Einstein—Gaddis adds that “all of these scientific revolutionaries couple imagination with logic to derive past processes from present structures” (40-41). In a similar manner, historians start with “structures”—archives, artifacts, memories—and then they “deduce the processes that produced them” (41). For the historian, the sources are what tie together the structures with the imagination, thus producing “virtual replicability” in which the historian presents a narrative of causal connection that can gain consensus.

As always, I highly recommend reading Gaddis’ book and exploring this topic in further detail. Yet with this minimal introduction, I think it’s possible to draw a few applications for the teacher. First, we should be able to communicate to students the interplay between imagination on the one hand and the possibility of objectivity in history on the other.[1]

Second, we should model for students how historians can take historical sources, read them in context with one another, and use thought experiments to “deduce the processes that produced them” (41). Such a task will require us as teachers to be practitioners of the discipline of history, not merely conveyors of knowledge.[2]

Third, teachers will need to re-ignite the student’s imagination and teach them to direct it appropriately toward the historical enterprise. Depending on the class, this task may be harder than we anticipate, but a thoughtful understanding of the make-up of our class and a creative array of projects, readings, and assignments has the potential of awakening students to the wo

[1]See pages 26-31 where Gaddis has an excellent discussion on the objectivity of history in response to challenges that it is too subjective.

[2]In addition to Gaddis’ book, I would recommend Sam Wineburg, Historical Thinking and Other Unnatural Acts: Charting the Future of Teaching the Past (Philadelphia: Temple University Press, 2001).