Life comes in a rhythm of ebb and flow, of pulsating highs and lows based largely on our circumstances and the failures or successes we experience among them. As much as we long for consistency and things to anticipate, life (in accordance with the purposes of the One who created it) has a way of keeping us at arm’s distance, making sure we never feel quite in control. In fact, sometimes it seems the only thing we can count on is a certain lack of comfort as we encounter deeper and more challenging issues day in and day out.

Amidst this chaos, the new year is a moment that can serve as a periodic reminder to reflect on the past, acknowledge the present for what it is, and set our teeth in resolve for the difficulties the future will undoubtedly entail. However, while I recognize the benefits of this sort of reflective exercise, it has occurred to me of late that instead of thinking solely in categories as natural and automatic as “past”, “present”, and “future”, there would seem to be some special merit in pushing ourselves to think on the level of the timeless. The fundamental question this level of thinking aims at answering is provocative and essential: what do we know to be always right and good, and how might we properly respond to the existence of timeless truth? There, where we recognize (and hopefully submit to) objective and eternal truth, real peace—tangible, genuine rest—is found, regardless of our temporal circumstances. 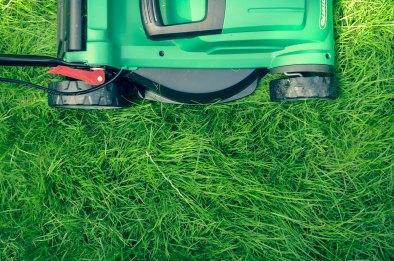 Growing up, I learned this lesson during the long Missouri summers I spent working lawn care with my Dad. As the sun rose in the sky, along with the stagnant humidity so evocative of those midwestern dog days, I would slowly wilt from my original state of bright-eyed morning optimism, falling into a mood reserved specially for a sweat-stained, furrowed nihilist. Once lunchtime passed and I had nothing left to look forward to but the remote promise of free time after work, I would begin to process a series of objections to my father’s line of work: What is the point of all this, putting ourselves through the pain of heat and exhaustion, just so we can come back in a week or two and mow the same grass again? Much as young George Bailey questioned his father’s tedious “business of nickels and dimes”, I could hardly wrap my mind around the thought of living as my father did, without the internal comfort of personal advancement and hope of eventual escape, indefinitely chained to menial and (to my adolescent eyes) meaningless labor. Nonetheless, provoking in my person both respect and pity, my father would align himself time and again with the original tenant of the Beverly Falls Building and Loan, who wisely admonished his disillusioned son: “You know, George, I think in some small way we are doing something important in this business of nickels and dimes.”

Though I would nod my head in the affirmative and tell him I understood, to my teenage mind, meaning and purpose were necessarily bound up in progress and accomplishment, a belief that left the toils of everyday experience largely empty. Forgetting the character of his calluses and the humble honesty of the gray surfacing in his beard, I am ashamed to admit that I regarded my father as succumbing to a regrettable fate of mere servile existence.

Since that time it has becoming increasingly apparent that the difficulties we’re currently experiencing in the western world correspond to the positions of my immature self, focused on progress, and my wiser father, who recognized the simple significance of consistent maintenance. By way of broad generalization, one side purports the dogma of late and continuing enlightenment, the other of early and timeless revelation. Progressives, by definition, have a constantly morphing ideal based on individualism, changing with the whims of the current populous or aristocratic intellectuals. Conservatives, by definition, affirm that they have something good, true, and beautiful—something timeless and even sacred—to conserve in each new century, decade, year, moment.

Since terms, especially within the fields of politics and philosophy, are routinely misunderstood due to equivocal usage and diverse meanings and connotations, I feel I must qualify what I mean by “conservatism”. In the negative sense, I do not refer specifically to the Republican Party, a set of theoretical Capitalist speculations, or the libertarian ideals of certain politicians who identify themselves as lying somewhere ‘on the right’; it is important to note, though, that the beliefs of those groups may overlap to a greater or lesser extent with the broader concept I am going to attach to the term. More universal than the American notion of conservatism, with its historical roots usually limited to the premises of the 18th century Founding Fathers, what I am referring to is the traditional—and I might argue Christian—understanding of conservatism that has much more to do with the contextualization of revealed truth in each successive age than the conservation of our favorite New Englanders’ ideals. Russell Kirk, the modern father of traditional conservatism, most succinctly illustrated his belief system when he wrote, “Men cannot improve a society by setting fire to it: they must seek out its old virtues, and bring them back into the light.” While progressives erase both the relevance of history and eradicate the opportunity for true progress by constantly shifting the fundamental ideals upon which their (our) society rests, conservatives recognize essential truth and seek to build upon those premises, making the study of what has happened pertinent to what we are doing and what will be done.

This concept of created order in the universe, often called natural law, grounded classical scientific and philosophical exploration from Aristotle to Aquinas and beyond, but was eventually called into question and eventually abandoned under the influence of Bacon’s scientism and Descartes’ rationalism. While the cultural and spiritual consequences of this detachment have been regularly and thoroughly documented (Dreher’s The Benedict Option and Esolen’s Out of the Ashes being two recent examples), I think it is important, as we embark on another year, to note the practical responsibility each one of us carry—as parents, educators, citizens, and most importantly, followers of Christ—in regard to our knowledge of the truth. If we believe that God has revealed truth is in His Word and in His world, then we must acknowledge our role as ambassadors and conservers as faithful believers in that message.

The appeal of progressivism is acutely understood because it taps into our internal craving for something new and exciting; it allows us to boast of contemporary supremacy over a history of barbarism, and allows the individual to entertain wild and imaginatively utopian dreams of the future, unrestrained by inherent order and recognition of tainted human nature. These dreams have no direction, and therefore, nothing is left out of the question. There is no real goal in our contemporary individualistic progressivism except a vague concept of escape from the drudgery and responsibility of tradition, just as I had no particular goal when I longed to do away with the long, exhausting hours of maintenance with my father. It seems our society wants change for the sake of change, but in the name of progress.

For some time the west has longed for unrestrained freedom and novelty, but now that the opportunity has come to grasp it the need for consistent culture and tradition is only more apparent. The truth of our postmodern age grows clearer each day, at least for those willing to recognize it: we will either splinter under the pluralistic strain of a thousand belief systems pulling society in their direction as we chart a course toward an entirely new tradition or we will return to our classical roots.

As I perceive America in the dawn of 2018, I could end this rambling article by making note of quite a few different trends in our society, but none as real or pervasive as the wearisome attitude most of us probably bring to the new year, at least in regards to the state of our country and broader world. Things don’t exactly seem to be looking up for the conservative Christian, let alone most anyone for that matter. As members of a group fast becoming fugitives of a forgotten culture in a hostile land, we annually run the risk of dejectedly falling into the trap of becoming the begrudged radicals we are regularly accused of being.

Instead of getting bogged down in the often overwhelming perspectives of ‘converting the world to the truth’ or ‘getting this country back on track’ (both admirable aspirations), let us not forget that, in the end, we are lowly servile workers, even bond-servants. This does not mean we do not love the world, but sometimes it is fitting to think in the terms Christ laid out, namely, that we should love God and love our neighbor. We are conservers of the truth, local maintenance workers. We are called to protect those timeless truths that are good, true, and beautiful in this world, believing it to be good because He called it so and He is so. Our experience may not appear glamorous or world-altering from our limited perspective when we live a life of local obedience to the truth, but by participating in the daily act of placing our faith in Christ, we are submitting to the notion that, through His grace, “in some small way we are doing something important.”

2 thoughts on “Life as Maintenance: A Reminder of the Beauty Found in Conserving What is Good”