Prefatory Note: Some portions of the following are a truthful fiction, meaning they communicate truths without necessarily corresponding with historical happenings. The exact opposite of most of modern journalism, now that I think of it…anyway.

Near the end of the semester, people often emanate their true nature, momentarily abandoning or accidentally forgetting their usually pedicured exoskeleton, giving rise to revealing results from time to time. Whether it be the stress of exams or the impending recognition that we will soon have to converse with our closest relations without the End Call button at our disposal, the end of the semester consistently disposes students of whatever veneer they regularly wear and converts them into selfish romanticists demanding everyone else “accept them as they are.”

For some reason this emergence of the authentic person seems dependent on a lack of maintenance when it comes to natural human norms of hygiene, nutrition, and sleep, and by way of passing comment, it does seem illustrative that the more ill-treated one’s physical state seems to be, the more passionately the “self-abuser” extols others to look beyond their increasingly distracting epidermis. In any case, I find, especially during finals week, that while I may have been previously inclined to enjoy a glossary conversation with said people’s façades, their authentic person is generally someone I would purpose to avoid. However, since such barbaric characters, with their unattended countenance and wild-eyed expressions, only surface every so often, I maintain a desire for at least one memorable encounter with them before they recuperate over break; here I relay one such encounter.

The premise is simple: two extremely fatigued college students, previously unacquainted and sitting at a table together due to the happy circumstance of a greatly overpopulated cafeteria. Both vaguely put-out that they will have to enact the charade of menial small-talk, and one lacking the material prerequisite of a truce from the looming barrage of meaningless chit-chat (a fully functioning and available cellular device), they first eye each other with conspicuous peripheral glances, then alternate more unabashed assessments, and finally break the silence by making eye contact and one extending an elongated, hissing sigh.

“Ready for the week to be over?” said The Sigher, staring somewhere between his plate and that of the other. The Other, myself, took a bite and then spoke, in order that the content of his next sentence might be obscured by a mouthful.

“Yeah for sure, I have only taken one final yet though,” I began, and he seemed to comprehend my meaning fully, despite flecks of saltine cracker escaping from my lips and eventually settling on various parts of my person, favoring my corrugated grey pants. “How about you, are you almost done?”

“Well I took three finals yesterday, but I still have my two hardest on Wednesday.” At this point I had already lost interest in our conversation and was mentally tracing the pattern of his flannel shirt, picturing my 1995 Geo Prism coming to a stop, going, and coming to a stop again at each intersection of the red and white lines on his apparel. Coming to the end of my journey at his sleeve-cuff, I looked up and, momentarily surprised that a person wore the atlas of my exploits and then embarrassed at my momentary surprise, attempted to continue the conversation, which he promptly refused by making a trip to the front for a drink refill.

It is when he returned, cup of soda in hand, that he made a remarkably valiant and ultimately fateful second attempt at conversation. Looking ponderously into the dark liquid, visibly leaning forward so as to catch his face in the reflection, he instead caught a face-full of fizz and pulled back abruptly with a cough into his shoulder. He finally made the awaited remark; It was awaited, of course, since I had gone last and it was, after all, his turn. 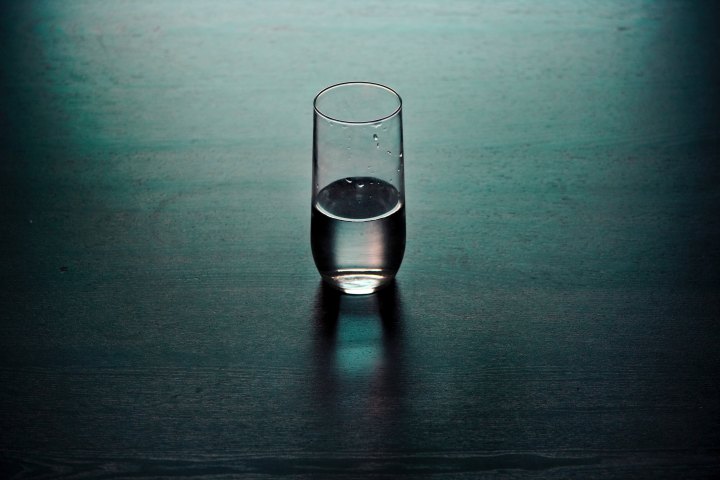 “You know I don’t really get why people like water. I mean like who likes water, it’s not like it tastes good or anything?” I blinked heavily once, and then twice. Not only was the change in conversational trajectory so completely unanticipated, but his vigorous, almost passionate tone stood in such opposition to what I had grown to expect of my longstanding compatriot that I found myself briefly flabbergasted, and, unable to flabber for two consecutive seconds, he continued his treatise.

“I just wish it tasted. The problem is we have to drink it and that’s not really fair because there are some of us that don’t like it.” Realizing he was genuinely invested in the topic after this reiteration and expounding on his initial point, I mumbled a remark about nutritional benefits and promptly left the table.

Now, as previously noted, my friend was probably not at his optimum mental capacity and was in dire straits as one forced into human interaction. His usual countenance and personality may have been temporarily complicated by the horrors and stresses of the sixteenth week of the semester. However, I cannot help but comment on his two grievances against water, which seem wholly unfair and altogether insensible.

First, he said he wished water had a distinctive and pleasant taste. At first glance, sure. I wish water tasted like my favorite drink. But on second thought, hopefully anticipated by the reader, I can’t help but recognize that too much of a good thing is not a good thing. If I was asked, day in and day out, to drink eight cups of my favorite liquid substance I would soon tire of its taste and eventually despise it. Now, some may have reason to raise an eyebrow, thinking of various substances they not only could drink eight cups of, but actually habitually drink at such a rate.

This then relates to the second grievance, for he says it’s not fair that some don’t like water, but due to the natural order of things, are forced to drink it. But think with me back to soda, and then think of your friends and relatives and acquaintances, and recall their preferred beverage. My guess is that you will find a plethora of different opinions, some religiously held, as to which are preferable and which abominable, those palatable and those repulsive, some delicious and some abhorrent.

The question is, what makes my friend, and any other citing his arguments, think that water would come in their own favorite flavor? My friend may perk up and solicit a utilitarian response: perhaps, water would come in the flavor the most people would like. Or maybe, just to be sure, we could hold an election and the winning flavor could become that of our dear old H2O. Or, what if the specialists and scientists and all those knowledgeable on the subject came in and analyzed people and came to a conclusion of what was best for humans, and then their concoction could be a stand-in for water. In all of these cases, which isolate and address the only possible negative argument against water (that it does not taste and we have to drink it), I tend to think we still might come out with water as the best possible option.

All of these considerations, while disjointed and fragmentary, bring to mind the words of Matthew 7:11, “If you then, who are evil, know how to give good gifts to your children, how much more will your Father who is in heaven give good things to those who ask him!” While I am as guilty as anyone of prodding God for reasons why He created in the way He did, this passage calls us to place our trust in a supremely faithful Creator and, more poignantly, a loving Father. The Christian life is, in the end, one of daily submission to God and His design. This release of the autonomous self in exchange for right relationship with what is, namely, God and His good creation, is what it means to be human. The more we live in bodily correspondence with the natural order and communicative correspondence with our Father, the more we are made into the image of His Son, and therefore, the more human we become.

Today, I rejoice in the common grace of water that does not taste.

Photo by Joseph Greve on Unsplash