Why are You on the Bench? A Look into the Trivium Applied to the Field of Sports

by Scott McElvain and Kyle Rapinchuk

Today is the day. August 17, 2017. The first day of year six at School of the Ozarks. It’s like opening day—the anticipation building over the off-season months, the preparation and practice that have gone into a good performance, and now it’s game day. We’re ready.

We both grew up playing sports, and though Kyle played baseball at College of the Ozarks and Scott played basketball there, both of us understand the effort that goes into being ready for game day. But it wasn’t just the effort in one off-season that prepared us for that moment; it was the cumulative preparation of years of practice, study, skill development, and games that shaped us into the players we were in our respective sports. So naturally, we both tend to see a lot of life situations through the lens of sports since that was such a huge part of the first 21 years of our lives.

And so one day we started chatting about the similarities between sports and classical Christian education, and we found ourselves asking: Does the Trivium apply to the athlete just as much as to the student? The short answer—YES!

Those familiar with Dorothy Sayers’ “The Lost Tools of Learning” known that she proposed that the Trivium (grammar, logic, and rhetoric) matched closely with the developmental stages of children. They begin with a love of repetition, move on to questioning why things are what and how they are, then finally move into expressing their opinions through rhetoric, both written and spoken. Sports, too, follow this pattern, and therefore the Trivium does apply to the athlete as it does to the student and recognizing this correlation can benefit both the athlete and the coach regarding a player’s growth. The athlete and the student, then, grow in the same way; both mature through a progression of the Trivium to master their craft.

This idea can be easily highlighted through exploring a few hypothetical basketball players and considering the question: Why are you on the bench? Below are a few players who are riding the pine for various reasons as they look to make it on the varsity basketball court.

Steve N. – This player sits the bench because he is unable to perform basic skills of the game. He turns the ball over on a consistent basis because of bad ball handling, passing to the opposing team, and shooting a knuckleball jump shot. Unable to perform foundational skills, this player cannot contribute to the team strategy due to his lack of fundamentals.

Tim D. – This player sits the bench because his mind is not right. He has a very loose conception of how the game is played. This leads to careless problems for the team that results in turnovers and fouls. Not only this, but Tim also does not seem to care for the team’s strategy to victory. Playing in a loose style, he does not gel with the boundaries of the game and the strategy of the team.

Allen I. – This player sits the bench because he is a robot. He is unable to think on the fly and runs plays without assessing the situation correctly. With a lack of creativity, Allen will pass up an open layup to run the play that the coached has ordered.

We can see that all three of these players struggle with aspects of the game. But looking closer, each player’s struggle correlates closely with a deficiency in one area of the Trivium. Steve N. struggles with the grammar of the game. His lack of foundational skills and knowledge make him unable to contribute or get in the game. Tim D. struggles with the logic stage, failing to grasp the rules and boundaries of the game. He lacks the ability to understand the game itself and the strategy that accompanies it. And finally, Allen I. is unable to express himself the correct way at the right time. With a lack of creativity and assessment of the situation, he is but a machine, only able to reproduce exactly what the coach has told him to do.

These players highlight what we as coaches and teachers have often noticed with both athletes and students. If a student is unable to master the stages of the grammar and logic, then they have an almost impossible road to climb to get off the bench. 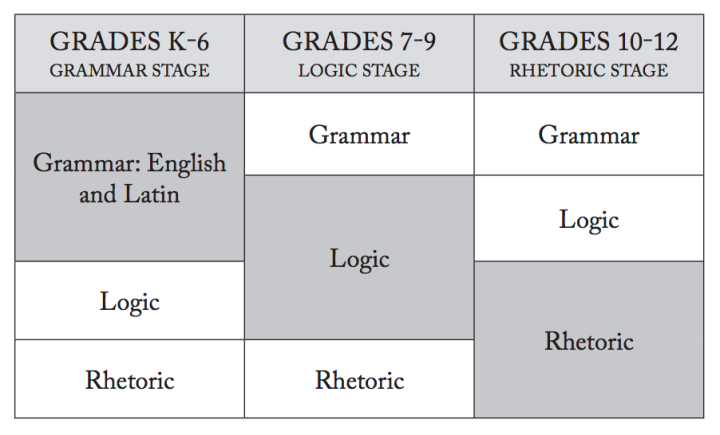 Dr. Christopher Perrin provides us with a simple chart[1] that demonstrates how all of the stages of the Trivium are happening simultaneously through all three phases. This is also true of the athlete. For a game to function, the player must at all times be exhibiting the fundamentals of the game, the rules and strategy, and the expression of these in cooperation in game situations. The particular emphasis of each stage, however, changes through the years of education, and we would contend that it develops similarly with the athlete. Few things are worse than watching youth basketball when a player looks to “express” himself to the detriment to the team. And likewise, when watching high school and college basketball, if there is an apparent lack of mastery of the fundamentals, then the game becomes unwatchable.

When an athlete can master these stages, it is a moving piece of beauty; it rivals any piece of poetry presented. The coach and athlete have much to gain from understanding the learning stages of the Trivium and implementing this approach can help both player and coach assess where work is needed in one’s game. In other words, the Trivium will help the athlete get off the bench.

In future articles and podcasts, we hope to explore not only how the Trivium might influence sports, but how sports might provide helpful insights into academic endeavors.

2 thoughts on “Why are you on the bench?”